Making and sending thank you or other occasion cards to our veterans, service members and their families are a simple but meaning way to engage our children of all ages in showing respect and gratitude. This is the first year we have made cards to send and I wanted to keep it simple for my toddler, who still seems to eat more crayon than gets places on paper, so I tried my hand at making a potato stamp in the shape of a poppy. 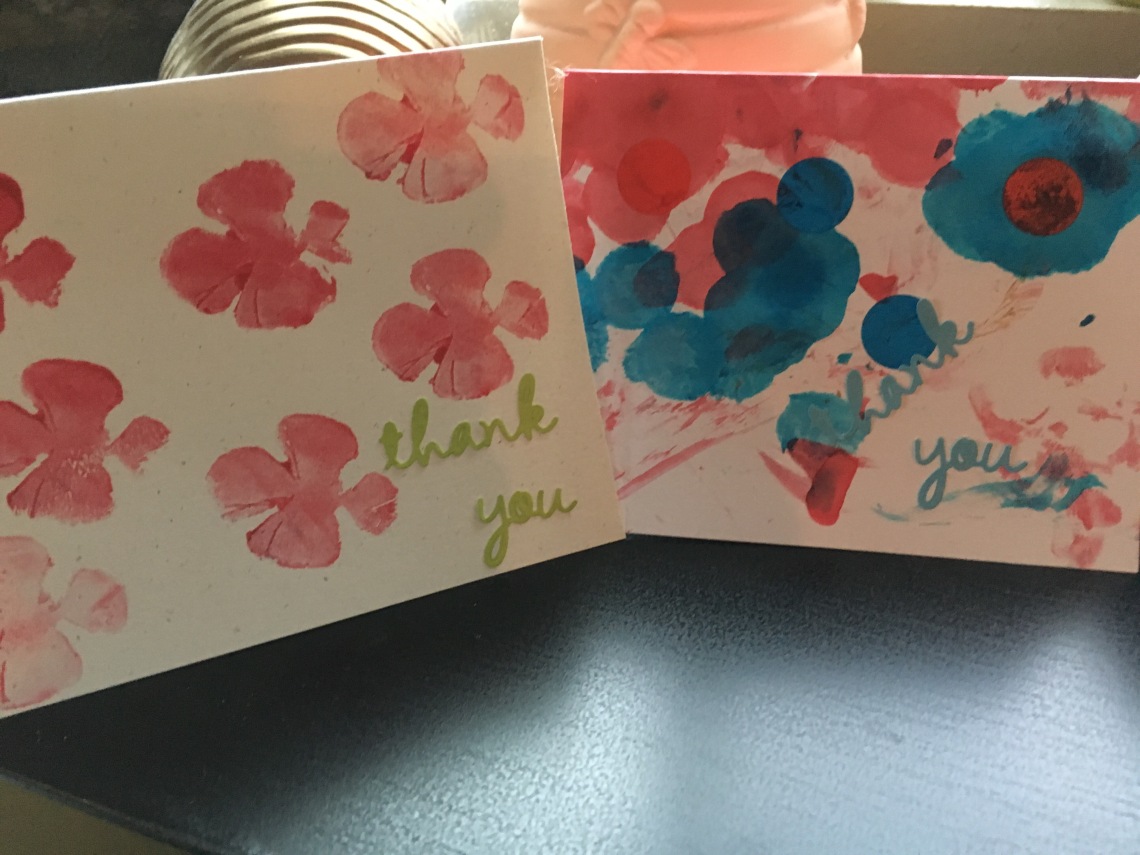 Supplies needed are a potato, a knife, some paint and some sort of plan. I selected a smaller potato to fit in little hands but any size really. The knife should be sharp and best an ‘adult’ task. Carve the design into the potato, make it raised by about 1/8 to a 1/4 inch and then either stamp it in paint or paint on the paint then stamp paper. I carved in both parts, more for practice and anticipation of nibbles. Here is a link to another great tutorial on more detailed potato stamps. The sky is really the limit. 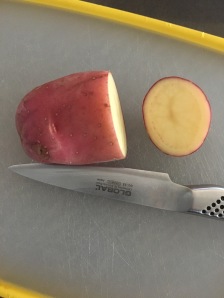 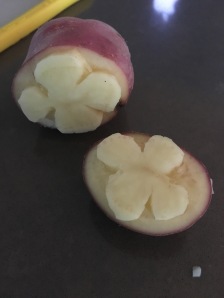 For this group of cards, we kept the supplies simple: colored dot stickers (from our potty enthusiasm collection), scribbled with a crayon or two, used the paint dauber markers (love these!) and of course the potato stamp. I try reallllly hard to not over orchestrate the crafts, especially given the little guys age. So the only real theme was red and blue with white paper. I think the cards turned out great, mess was made (a good sign IMHO) and only two small bites were taken from the potato. Which, while it ended their utility, was more perplexing than anything – you will take a bit out a raw potato covered in red paint but not a cherry tomato or yam?

Next steps are writing thoughtful messages inside, note creation details on the back and then send them on their way to a Veteran.  There are lots of organizations to support this type of project. check out www.operationwearehere.com, www.operationgratitude.com and www.dosomething.org, among so many.  This year’s batch of cards will be staying local as a group at work is collecting and delivering to an area group.

Why the poppy? Originally, wearing a poppy was designed for Memorial Day celebrations in May but now is worn in November for Veterans Day as well. The poppy was selected as a symbol of war veterans after World War I after observations of poppies blooming in war torn fields were reported. A famous poem was penned title In Flanders Fields by John McCrae and a few years later used as inspiration by Moina Michael for a fundraiser to support related charities.  Check out www.va.gov for more information.

Excerpt:   In Flanders fields the poppies blow
Between the crosses, row on row,
That mark our place; and in the sky
The larks, still bravely singing, fly
Scarce heard amid the guns below

Share your ways to celebrate Veterans and/or Potato Stamp ideas!

Bonus! Just some more fun with paint daubers. Trace picture outlines, maybe glue a felt embellishment on and let them loose! This set of pictures were for some friends that lived in the Georgetown neighborhood of Seattle (Hat and Boots at Oxbow!) and moved out of state. 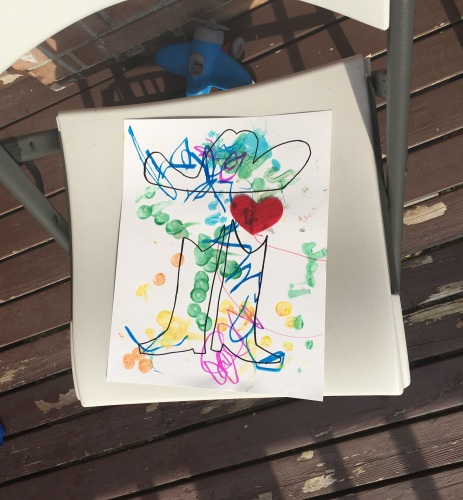 One thought on “Potato stamp Thank You cards for Veterans”