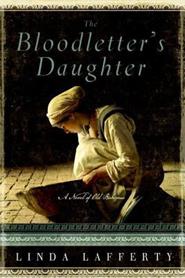 Another intriguing historical fiction work, based closely on the Bohemian legend of Marketa Pichlerova of Cesky Krumlov, the bath maid at the center of this quick read. (I stumbled across this one as part of an Amazon Local deal.) Sometimes I find historical fiction works to be a slog to read. This novel however pulls you right along with a good balance of medieval dialogue, modern day sentencing and a fluid plot. Do not fear the 500 page length, I read it in a matter of a few days, granted I had the luxury of some dedicated pool time and a plane ride, to really get into it. Marketa is a powerful female character, who, I think, knows who she is and where she would ultimately want to go. It is when perhaps she strays from her true self the twists and turns occur.

The book centers around the theme of life is a series of choices and choices have consequences.

At its origins bleeding a patient to health was modeled on the process of menstruation. The wise old Hippocrates believed that menstruation functioned to “purge women of bad humors”. There were believed to be four humors: blood, phlegm, black bile, and yellow bile, relating to the classical elements of air, water, earth and fire respectively. The peak of this practice occurred in many countries, likely simultaneously, centuries before the setting of this novel, but was still continued out by barbers (as is Marketa’s father). Ironic how today every good barber strives to nary a knick. Cupping is also related to the practice of bloodletting, and is still something practiced in Chinese medicine today. This practice is not so much about release blood as increasing blood flow and activity. Ayurveda also incorporates such principles.

Leeches, as every good pharmacist knows, still live in many hospitals today. The species Hirudo medicinalis are used for such indications as the reattachment of body parts and reconstructive and plastic surgeries (all about encouraging blood flow) and, in Germany, for treating osteoarthritis. Leech spit (more properly, saliva) contains the protein, hirudin, an anticoagulant (blood thinner). Refined versions are present now in commercially manufactured medications.

Lastly, true bloodletting, phlebotomy, is now primarily used to diagnosis, not treat. However, it is still a mainstream treatment for patients with hemochromatosis, also known as iron overload.

Thank you to Wikipedia, and four years of pharmacy school.