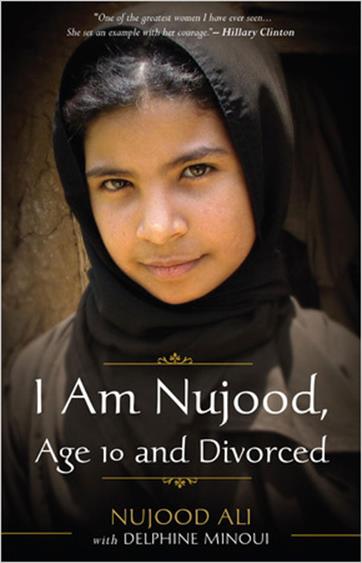 “I’m a simple village girl who has always obeyed the orders of my father and brothers. Since forever, I have learned to say yes to everything. Today I have decided to say no.”

Do you know who, in addition to Hilary Clinton, Nicole Kidman, Tyra Banks, Jane Goodall and Condoleezza Rice were named Women of the Year in 2008 by Glamor? Nujood Ali of Yemen and her empowering lawyer turned dear friend Shada Nassar. What does Nujood have in common with a ginger starlet, presidential hopeful, fierce environmentalist, super model and powerful international relations maven. No I don’t have a photographic memory of such reward, nor have it posted on bedroom wall next to my Kurt Kobain poster. I haven’t even read a Glamour magazine beyond the cover in the airport news store in quite some time. I did however, finish listening to the audio – biography of Nujood, proclaimed as the world’s youngest divorce and a modern day reminder that marriage as a means of oppression and violence against women is strong and present in the world today.

What struck me with Nujood’s story was first – how strong her voice came through and really how she first and foremost wanted her innocence and childhood back and second, how cornerstone the lack of education for girls fuels and perpetuates the oppression both by reinforcing and also not allowing the victims the tools, the realization that it doesn’t have to be this way. This is short book packed with story

Nujood still has a lot of life and struggle ahead of her, this book has not been a catapult to the “good life”. In fact, at the close of the book, she still struggles to stay in a school and her family still subsists on meager resources. Some of this is her choice to stay with her family but not all and there is an undercurrent of resentment from her own family, at the apparent “lack of fortune” . More recent interviews reveal new struggles, like her father pocketing most of the book revenue, taking additional wives. I did at several points anticipate more bad things to happen to her, like being turned away at court house, kidnapped by her husband, stoned, house torched etc but fortunately that didn’t happen. Why did I keep waiting? My guess is that that is what “we” have grown to expect. Married at nine is not bad enough …… this offered me the chance to reflect on the wise words of Will I Am –

“I think the whole world addicted to the drama. Only attracted to things that’ll bring you trauma.”

Another interesting viewpoint uncovered while researching for this post that I would like to share – maybe this cultural practice versus that cultural practice is wrong or right. I am not condoning violence in any manor but found some criticism of the recently released documentary Half the Sky intriguing. Racialicious.com (interesting url…..) posts a very different view and calls some of the film’s portrayal and publicity of gender violence forms of poverty porn (yucky sounding term, huh). Most of the criticisms surround the use of the rich and famous descending upon these tragedies and the apparent reinforcement of white saving colored. It gets really deep but rounds out the end of the post with a quote by Linda Martín Alcoff (feminist philosopher): “The practice of privileged persons speaking for or on behalf of less privileged persons has actually resulted (in many cases) in increasing or reinforcing the oppression of the group spoken for.” So what does all this mean? I am not a feminist, philosopher and didn’t take an anthropology course in college but after skimming almost all of Linda’s article the Problem of Speaking for Others then skipping to the conclusion, it is really about knowing why you are speaking and for whom and then maybe stop speaking. Thank you again to Nujood for telling her story.

Maybe I should have just pasted Linda’s quote instead of dancing around the racialicious stuff. Too late now. In hindsight, this also relates to my criticism of Three Cups of Tea…we know who he was speaking for……

So rather than get choked up and moved by an Oscar winner’s tears, educate yourself about the stories from the victims themselves but don’t watch them purely for drama, respect that American “culture” doesn’t have it all figured out (think of all the sex traffic we have in our backyards; veils are not the problem), educate yourself about the world around you and support the education of others.